There’s no way around it. Smoking is bad for your health. Smoking harms nearly every organ of the body. Cigarette smoking causes 87 percent of lung cancer deaths. It is also responsible for many other cancers and health problems. These include lung disease, heart and blood vessel disease, stroke and cataracts. Women who smoke have a greater chance of certain pregnancy problems or having a baby die from sudden infant death syndrome (SIDS). Your smoke is also bad for other people they breathe in your smoke secondhand and can get many of the same problems as smokers do.

E-cigarettes often look like cigarettes, but they work differently. They are battery-operated smoking devices. Not much is known about the health risks of using them.

Quitting smoking can reduce your risk of health problems. The earlier you quit, the greater the benefit.

Some initial facts and figures

About 100,000 people in the UK die each year due to smoking. Smoking-related deaths are mainly due to cancers, chronic obstructive pulmonary disease (COPD) and heart disease.

About half of all smokers die from smoking-related diseases. If you are a long-term smoker, on average, your life expectancy is about 10 years less than a non-smoker. Put another way, in the UK about 8 in 10 non-smokers live past the age of 70 but only about half of long-term smokers live past 70. The younger you are when you start smoking, the more likely you are to smoke for longer and to die early from smoking.

Many smoking-related deaths are not quick deaths. For example, if you develop COPD you can expect several years of illness and distressing symptoms before you die.

Smoking increases the risk of developing a number of other diseases (listed below). Many of these may not be fatal but they can cause years of unpleasant symptoms.

Once You Start, It’s Hard to Stop

Smoking is a hard habit to break because tobacco contains nicotine, which is highly addictive. Like heroin or other addictive drugs, the body and mind quickly become so used to the nicotine in cigarettes that a person needs to have it just to feel normal.

People start smoking for a variety of different reasons. Some think it looks cool. Others start because their family members or friends smoke. Statistics show that about 9 out of 10 tobacco users start before they’re 18 years old. Most adults who started smoking in their teens never expected to become addicted. That’s why people say it’s just so much easier to not start smoking at all.

Smoking and the use of other tobacco products, including cigars and smokeless tobacco, causes or worsens numerous diseases and conditions. Some products also expose nearby people to toxic secondhand smoke.

Find out more on the health effects of smoking, secondhand smoke, other tobacco products and marijuana.

The American Lung Association’s Freedom From Smoking® program helps adult smokers quit cigarettes for good through proven skills and techniques. Learn more about our advocacy efforts to reduce tobacco use and exposure to secondhand smoke.

Cardiovascular disease is the main cause of death due to smoking.

Hardening of the arteries is a process that develops over years, when cholesterol and other fats deposit in the arteries, leaving them narrow, blocked or rigid. When the arteries narrow (atherosclerosis), blood clots are likely to form.

Smoking accelerates the hardening and narrowing process in your arteries: it starts earlier and blood clots are two to four times more likely.

Cardiovascular disease can take many forms depending on which blood vessels are involved, and all of them are more common in people who smoke. 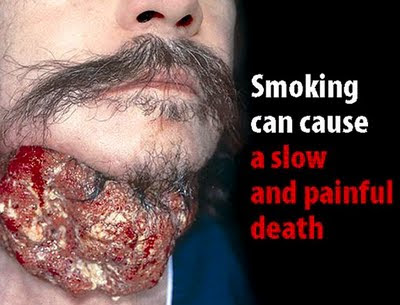 Smokers are more likely to get cancer than non-smokers. This is particularly true of lung cancer, throat cancer and mouth cancer, which hardly ever affect non-smokers.

The link between smoking and lung cancer is clear. Ninety percent of lung cancer cases are due to smoking. If no-one smoked, lung cancer would be a rare diagnosis – only 0.5 per cent of people who’ve never touched a cigarette develop lung cancer. One in ten moderate smokers and almost one in five heavy smokers (more than 15 cigarettes a day) will die of lung cancer.

The more cigarettes you smoke in a day, and the longer you’ve smoked, the higher your risk of lung cancer. Similarly, the risk rises the deeper you inhale and the earlier in life you started smoking. For ex-smokers, it takes approximately 15 years before the risk of lung cancer drops to the same as that of a non-smoker.

If you smoke, the risk of contracting mouth cancer is four times higher than for a non-smoker. Cancer can start in many areas of the mouth, with the most common being on or underneath the tongue, or on the lips.

COPD typically starts between the ages of 35 and 45 when lung function starts to decline anyway. In smokers, the rate of decline in lung function can be three times the usual rate. As lung function declines, breathlessness begins.

As the condition progresses, severe breathing problems can require hospital care. The final stage is death from slow and progressive breathlessness.

For men in their 30s and 40s, smoking increases the risk of erectile dysfunction (ED) by about 50 per cent. Erection can’t occur unless blood can flow freely into the penis, so these blood vessels have to be in good condition. 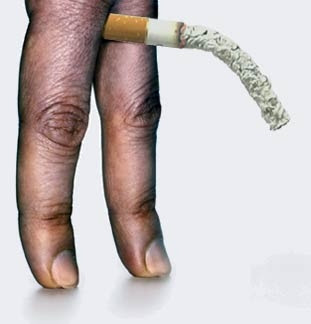 Smoking can damage the blood vessels and cause them to degenerate: nicotine narrows the arteries that lead to the penis, reducing blood flow and the pressure of blood in the penis.

This narrowing effect increases over time, so if you haven’t got problems now, things could change later.

Erection problems in smokers may be an early warning signal that cigarettes are already damaging other areas of the body – such as the blood vessels that supply the heart.