Rabies is one of the most well known of all the viruses. Fortunately, through active vaccination and eradication programs, there were only 3 reported cases of human rabies in the United States in 2006, although 45,000 people were exposed and required post-exposure vaccination and antibody injections. In other parts of the world, however, human cases and deaths from rabies are much higher. Around the world 1 person dies from rabies every 10 minutes.

Who is at risk?

People that work closely with wildlife, veterinarians, and travelers are at the highest risk of exposure. Fortunately, there is a vaccine that is available to protect high-risk people. Animals that come into contact with wildlife and are not vaccinated are at a higher risk of infection. While the risk of coming into contact with the virus is very low, it nevertheless does exist. Because of the movement of carriers, there is always the risk of exposure.

Transmission of the disease The transmission of the disease almost always occurs as a result of an infected animal biting a non-infected animal. Skunks, raccoons, foxes, coyotes and bats are the animals most likely to transmit the virus. There have been a few reported cases of infection resulting from aerosolization occurring in caves where large quantities of infected bats reside. Rabies virus does not live very long outside the host and remains viable in the carcass of an infected animal for less than 24 hours. The rabies virus is shed at high levels in saliva. However, being bitten by a rabid animal does not necessarily mean that the bitten animal (or human) will become infected. It has been speculated, that only around 15% of exposed people will contract the disease. Humans, cats, and dogs are only mildly susceptible to the disease.

After coming in contact with the virus, the bitten animal may go through one or all of several stages. With most animals, the virus will spread through the nerves of the bitten animal towards the brain. The virus is relatively slow moving and the average time of incubation from exposure to brain involvement is between 3 to 8 weeks in dogs, 2 to 6 weeks in cats, and 3 to 6 weeks in people. However, incubation periods as long as 6 months in dogs and 12 months in people have been reported. After the virus reaches the brain it then will move to the salivary glands where it can be spread through a bite. After the virus reaches the brain the animal will show one, two, or all of the three different phases

The first is the prodromal phase and usually lasts for 2-3 days in dogs. Apprehension, nervousness, anxiety, solitude, and a fever may be noted. Friendly animals may become shy or irritable and may snap, whereas, aggressive animals may become affectionate and docile. Most animals will constantly lick the site of the bite. In cats, the prodromal phase lasts for only 1-2 days and they usually develop more fever spikes and erratic behavior than dogs. 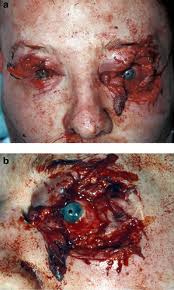 From the prodromal phase, animals may enter the furious stage; cats are particularly prone to developing this phase. The furious stage of the disease in dogs usually lasts for 1 to 7 days. Animals become restless and irritable and are hyperresponsive to auditory and visual stimuli. As they become more restless, they begin to roam and become more irritable and vicious. When caged, dogs may bite and attack their enclosures. Animals progress to become disoriented and then have seizures and eventually die.

Animals may develop the paralytic phase either after the prodromal or furious stage. The paralytic phase usually develops within 2 to 4 days after the first signs are noted. Nerves affecting the head and throat are the first to be involved and animals may begin to salivate as a result of their inability to swallow. Deep labored breathing and a dropped jaw may result as the diaphragm and facial muscles become increasingly paralyzed. Animals may make a choking sound and many owners think that there is something lodged in the dog’s throat. The animal will get weaker and eventually go into respiratory failure and die.

The current way to diagnose rabies in animals is to submit the brain for microscopic examination. Some new testing techniques utilizing skin and or blood samples are being studied and used in a few research settings and show promise as a way of testing potentially exposed humans and animals. They are not routinely being used at this time.

There is no treatment. Once the disease develops in humans, death is almost certain. Only a handful of people have survived rabies after extremely intensive medical care. There have been several reported cases of dogs surviving the infection, but they are very rare.

Vaccination is the best way to prevent infection and properly vaccinated animals stand very little chance of contracting the disease. While rabies vaccination for dogs is mandatory for all states, it is estimated that up to half of all dogs are not vaccinated. Some communities are also requiring cats to be vaccinated, which is very important because there are currently more cases of cat rabies than dog rabies. Some people estimate that less than ten percent of the cat population is vaccinated thus leading to the high incidence of rabies in cats. The standard vaccination protocol is to vaccinate cats and dogs at three or four months and then again at one year of age. A year later, a three-year rabies vaccination is recommended. The three-year vaccine has been tested and shown to be very effective. A few counties, states, or individual veterinarians require yearly or once every two-year vaccination for a variety of reasons that need to be explored more closely.

There is a series of vaccines that can be used to vaccinate people at high risk. There are some vaccines available for large animals also. The question of vaccinating exotic animals is a common one. There are no approved products for most exotics (withthe exception of ferrets), however, canine vaccine is used on some species to offer some protection. Vaccinating exotics or wolf hybrids should be dealt with individually in cooperation with your local veterinarian and public health officials. Keeping a wild animal that is at high risk of being a carrier such as a skunk or raccoon is never recommended.

Any pet who is bitten or scratched by either a wild, carnivorous mammal or a bat that is not available for testing should be considered as having been exposed to rabies. Public health officials recommend that unvaccinated dogs, cats, and ferrets exposed to a rabid animal should be euthanized immediately. If the owner is unwilling to have this done, the animal should be placed in strict isolation for 6 months and vaccinated 1 month before being released. Animals with expired vaccinations need to be evaluated on a case-by-case basis. Dogs and cats that are currently vaccinated are kept under observation for 45 days.

If an animal bites a human, the animal will be either quarantined or observed for a period of at least ten days to ensure that it does not have rabies. Whether or not the animal was currently vaccinated and the community that you live in will dictate the requirements of the quarantine. People that do become exposed to a rabid animal can be given post exposure vaccinations and a globulin (antibody) injuection to protect them against becoming infected. Any person bitten by an animal should wash the wound thoroughly with soap and water and seek medical attention immediately.