If you are infected with a strain of HPV that causes genital warts, you may develop symptoms of genital warts anywhere from a few weeks to a few months after exposure. In some cases, though, the virus may lay dormant in your system for a few years before you develop any genital warts symptoms.

Genital warts are often said to look like little cauliflower florets. They are usually white or flesh-colored, may either lay flat or be raised, appear by themselves or in clusters, and can be found in or around the vagina or anus or on the vulva or penis. Generally, the warts themselves are not painful but they can interfere with normal bodily functions, such as urinating and bowel movements, making these actions painful and uncomfortable.

The net result is that very few people ever have the chance to place genital HPV in an accurate context, as the very common virus it really is. According to an article published in 1997 in the American Journal of Medicine, about 74 percent of Americans nearly three out of four have been infected with genital HPV at some point in their lives.

Among those ages 15-49, only one in four Americans has not had a genital HPV infection.

A common concern of women are bumps that they discover on the vulva. Before you panic, know that there are a several causes of bumps or pimples on the female genitalia and most of them are NOT contagious, NOT life threatening, and NOT STDs.

Here’s what you need to know

Cysts are common and can occur anywhere on the body. In the vulva (the area near the vagina) they often arise from a blocked skin gland. They often look like pimples or lumps under the skin. If fairly large or uncomfortable, it can be incised and drained by a doctor. Squeezing them on your own is NOT a good idea as it can cause the introduction of bacteria and cause infection.

A few common genital cysts in women include:

Blocked hair follicles, or folliculitis is probably the most common “bump” seen in the genitalia of men and women. The bumps are often irritated and tender. They are infected and may require antibiotics and a large incision and drainage to treat. 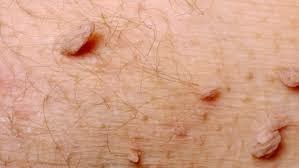 Genital herpes is an STD. It usually causes itchy, burning and painful lesions that often start as a sore spot resembling a bug bite, but progresses over a few days to a blister or group of blisters and then an open ulcer. Treatment includes antiviral medications and pain meds.

Infection with subtypes 6 or 11 of the human papilloma virus (HPV) can cause genital warts. It too is a sexually transmitted disease. These “bumps” have a cauliflower like appearance. They are rough to the touch and can spread. Treatment includes applications of medications to freeze off the lesions or improve the immune system to fight the virus.

Molluscum contagiosum. This viral infection causes small, fleshy bumps on the vulva with a central indentation. They have a pearly color to them. They usually go away without treatment.

Skin tags are fleshy irregular shaped growths of normal skin that can occur on the vulva or elsewhere on the body.

And, there are a multitude of other causes of female genital bumps. While most are minor and require little or limited treatment, others are STDs. Therefore, if you discover a “bump”, be sure to get it checked out by your doctor!

Other rashes in the vaginal area

Other conditions that may cause a rash in the vaginal area include:

Sores, blisters, or lumps in the vaginal area

Conditions that may cause a sore, blister, or lump include: