Psoriasis is a genetic skin disease associated with the immune system. The immune system causes skin cells to reproduce too quickly. A normal skin cell matures and falls off the body’s surface in 28 to 30 days.

However, skin affected by psoriasis takes only three to four days to mature and move to the surface. Instead of falling off (shedding), the cells pile up and form lesions. The skin also becomes very red due to increased blood flow.

The disease affects as many as 7.5 million people in the U.S, about 2.6 percent of the population. Psoriasis occurs nearly equally in men and women across all socioeconomic groups. It occurs in all races, though Caucasians are slightly more affected. 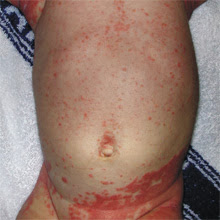 Napkin psoriasis may present as persistent nappy rash with flexural involvement and a well-demarcated edge.Ordinarily, people have their first outbreak between the ages of 15 and 35, but it can appear at any age.

Approximately one-third of those who get psoriasis are under 20 years old when the disease first surfaces.

Every year, roughly 20,000 children under 10 years of age are diagnosed with psoriasis. Sometimes it is misdiagnosed because it is confused with other skin diseases. Symptoms include pitting and discoloration of the nails, severe scalp scaling, diaper dermatitis or plaques similar to that of adult psoriasis on the trunk and extremities. Psoriasis in infants is uncommon, but it does occur. Only close observation can determine if an infant has the disease.

Cause Psoriasis in Children

No one knows exactly what causes psoriasis, but it has a genetic component. Most researchers agree that the immune system is somehow mistakenly triggered, which speeds up the growth cycle of skin cells.

Researchers believe that for a person to develop psoriasis, certain steps must happen. The individual must receive a combination of different genes that work together to cause psoriasis. The individual must then be exposed to specific factors that can trigger his or her particular combination of genes to cause the disease. These triggers are not yet fully understood or defined; however, certain types of infection and stress have been identified as potential triggers. 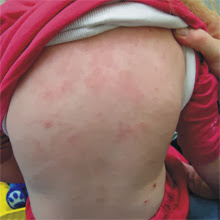 Psoriasis in children is often difficult to distinguish from atopic eczema.

If one parent has the disease, there is about a 10 percent chance of a child contracting it. If both parents have psoriasis, the chance increases to 50 percent. No one can predict who will get psoriasis. Scientists now believe that at least 10 percent of the general population inherits one or more of the genes that create a predisposition to psoriasis. However, only 2 to 3 percent of the population develops the disease.

What Triggers Psoriasis in Children

Some young people report the onset of psoriasis following an infection, particularly strep throat. One-third to one-half of all young people with psoriasis may experience a flare-up two to six weeks after an earache, strep throat, bronchitis, tonsillitis or a respiratory infection.

Areas of skin that have been injured or traumatized are occasionally the sites of psoriasis, know as the “Koebner [keb-ner] phenomenon.” However, not everyone who has psoriasis develops it at the site of an injury.