Obsessive-compulsive disorder (OCD), formerly considered a type of anxiety disorder, is now regarded as unique condition. It’s a potentially disabling illness that traps people in endless cycles of repetitive thoughts and behaviors. People with OCD are plagued by a recurring and distressing thoughts, fears, or images (obsessions) they cannot control. The anxiety (nervousness) produced by these thoughts leads to an urgent need to perform certain rituals or routines (compulsions). The compulsive rituals are usually performed in an attempt to prevent the obsessive thoughts or make them go away.

Although the ritual may temporarily alleviate anxiety, the person must perform the ritual one more time when the obsessive thoughts come back. This OCD cycle progresses to the point of taking up hours of the person’s day and significantly interfering with normal activities. People with OCD may aware that their obsessions and compulsions are senseless or unrealistic, but they can’t stop them. 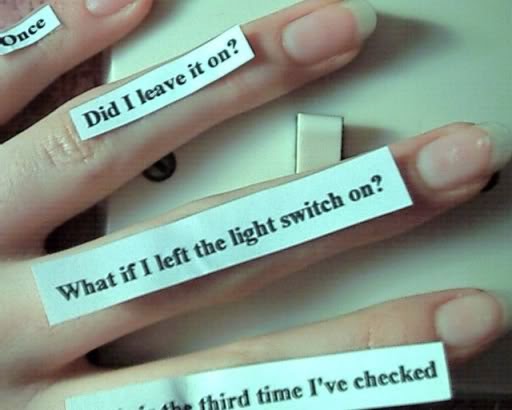 Understanding about OCD Obsessions and Compulsions

Obsessions are involuntary, seemingly uncontrollable thoughts, images, or impulses that occur repeatedly on your mind. You do not want to have these ideas but you can’t stop them. It’s unfortunate that these obsessive thoughts are often disturbing and distracting.

Compulsions are behaviors or rituals that you feel driven to act out repeatedly. Usually, compulsions are performed in an attempt to make obsessions to go away. For example, if you are afraid of contamination, you might develop an elaborate cleaning rituals. However, the relief won’t lasts. In fact, the obsessive thoughts usually come back stronger. And the compulsive behaviors are often end up causing anxiety themselves as they become more demanding and time-consuming.

Most people with OCD falls into one of the following categories:

OCD sometimes runs in families, but no one knows for sure why some people have it while others don’t. Researchers found that the several parts of the brain are involved in fear and anxiety. To learn more about fear and anxiety in the brain, scientists may be able to create the better treatments. Researchers are also looking for ways in which stress and environmental factors may play a role.

What Are the Symptoms of Obsessive Compulsive Disorder:?

The symptoms of OCD, which are the obsessions and compulsions, may vary. Common obsessions includes:

OCD is generally treated with a medication, psychotherapy, or both.

Antidepressants are used to treat depression, but they’re also particularly helpful for OCD, probably more so than the anti-anxiety medications. They may take on several weeks 10 to 12 weeks for some to start working. Some of these medications may cause an side effects such as headache, nausea, or sleeping difficulty. The side effects are usually not a problem for most people, especially if a dose starts off low and slowly increased over time. Talk to your doctor about any side effects you may have.

Anti-anxiety medications are powerful and there are different types. Many types begins working right away, but they generally shouldn’t be taken for long periods.

It’s important to know that although antidepressants can be safe and effective for many people, they may be risky for some, especially for children, teens, and young adults. A “black box”—the most serious type of warning that a prescription drug can have has been added to the labels of antidepressant medications. These labels will warn people that antidepressants may cause some people to have suicidal thoughts or attempting a suicide. Anyone taking antidepressants should be monitored closely, especially when they first start the treatment with medications.

Some people with OCD do better with cognitive behavior therapy, especially in exposure and response prevention. Others will do better with medication. While others do best with a combination of the two. Talk to your doctor about the best treatment for you.

OCD usually responds well to treatment with certain medications and/or exposure-based psychotherapy, in which people face the situations that causes fear or anxiety and become less sensitive (desensitized) to them. NIMH is a supporting research into new treatment approaches for people whose OCD does not respond well to the usual therapies. These approaches includes combination and augmentation (add-on) treatments, as well as modern techniques, such as a deep brain stimulation.

What happens if Obsessive Compulsive Disorder is not treated?

Without treatment, the symptoms of OCD can progress to the point that the sufferer’s life becomes consumed, inhibiting their ability to attend the school, keeping a job, and/or maintain important relationships. Many people with OCD have thoughts about killing themselves, and about 1% complete suicide.

In terms of the prognosis for the specific symptoms, it’s rare for any to progress to a physically debilitating level. However, problems like a compulsive hand washing can eventually cause complications like the skin becoming dry and even breaking down. Repeated trichotillomania results in unsightly scabs on the person’s scalp.

When you’re experiencing OCD thoughts and urges, try shifting your attention to something else.

At the end of the delaying period, reassess the urge. In many cases, the urge will no longer be quite as intense. Try delaying for a longer period. The longer you can delay the urge, the more it will likely change.

Write down your obsessive thoughts or worries

Keep a pad and pencil on you, or type on a laptop, smartphone, or tablet. When you begin to obsess, write down all your thoughts or compulsions.

By anticipating your compulsive urges before they arise, you can help to ease them. For example, if your compulsive behavior involves checking that doors are locked, windows closed, or appliances turned off, try to lock the door or turn off the appliance with extra attention the first time.

Rather than trying to suppress obsessions or compulsions, develop the habit of rescheduling them.

Create a tape of your OCD obsessions

Focus on one specific worry or obsession and record it to a tape recorder, laptop, or smartphone.

By continuously confronting your worry or obsession you will gradually become less anxious. You can then repeat the exercise for a different obsession.

Self-help for OCD tip 2: Take care of yourself

Start the day right with breakfast, and continue with frequent small meals throughout the day. Going too long without eating leads to low blood sugar, which can make you feel more anxious.

Alcohol temporarily reduces anxiety and worry, but it actually causes anxiety symptoms as it wears off. Similarly, while it may seem that cigarettes are calming, nicotine is actually a powerful stimulant. Smoking leads to higher, not lower, levels of anxiety and OCD symptoms.

Not only can anxiety and worry cause insomnia, but a lack of sleep can also exacerbate anxious thoughts and feelings. When you’re well rested, it’s much easier to keep your emotional balance, a key factor in coping with anxiety disorders such as OCD.

Self-help for OCD tip 3: Reach out for support

Obsessive-compulsive behavior (OCD) can get worse when you feel powerless and alone, so it’s important to build a strong support system. The more connected you are to other people, the less vulnerable you’ll feel. Just talking about your worries and urges can make them seem less threatening.

Stay connected to family and friends

Obsessions and compulsions can consume your life to the point of social isolation. In turn, social isolation can aggravate your OCD symptoms. It’s important to have a network of family and friends you can turn to for help and support. Involving others in your treatment can help guard against setbacks and keep you motivated.

You’re not alone in your struggle with OCD, and participating in a support group can be an effective reminder of that. OCD support groups enable you to both share your own experiences and learn from others who are facing the same problems.

Helping a loved one with obsessive-compulsive disorder (OCD)

If a friend or family member has OCD, your most important job is to educate yourself about the disorder. Share what you’ve learned with your loved one and let them know that there is help available. Simply knowing that OCD is treatable can sometimes provide enough motivation for your loved one to seek help.

Tips for helping a family member or friend with OCD

The way you react to a loved one’s OCD symptoms can have a big impact.