Contact dermatitis (skin inflammation) is caused by an adverse reaction to something that touches the skin, including chemicals found in detergent, soap or a fragrance. For example, you may develop a rash on your chest when you wear a shirt that was washed with a particular detergent or treated with a chemical. Metal, such as a necklace rubbing against your chest, can also cause chest rash. Other forms of contact dermatitis include exposure to certain plants, such as poison oak or ivy, an animal bite, or an insect sting. Lyme disease is caused by tick bite, which can first appear as a circle with a bull’s-eye pattern, then progress to a rash. 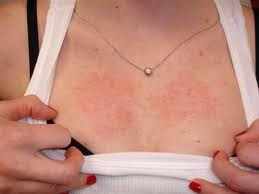 Allergies to food and medications are potentially serious sources of rash. Peanuts, shellfish, strawberries and avocados are just some of the foods that can trigger allergic reactions. These foods may cause mild reactions; however; in some cases, reactions could develop into potentially life-threatening conditions characterized by vomiting, difficulty breathing, or swelling. Allergic purpura is a serious, often life-threatening allergic reaction that can cause a chest rash but can also affect the joints, gastrointestinal tract, and kidneys. 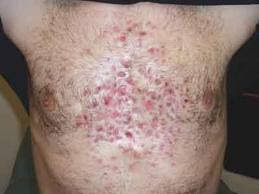 What Rashes Can You Take Care of at Home?

Most contact rashes can be treated at home by following these guidelines:

Do not scratch your rash. If it itches, try an over-the-counter hydrocortisone cream (one percent). Lotion with calamine can soothe rashes caused by chicken pox and poison ivy, poison oak, or poison sumac.

read more about How to treat Rash on Face